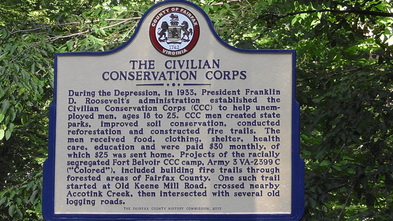 Civilian Conservation Corps
by Mary Buckingham Lipsey
In 1933, the United States elected President Franklin D. Roosevelt, who promised to ease the pains of the Great Depression. Within the first week of Roosevelt’s administration, he challenged his staff to find a way to put 500,000 single, young men to work in nationwide conservation projects.  On March 31, 1933, Congress passed legislation establishing the Civilian Conservation Corps (CCC). The first CCC camp in Virginia, Camp Roosevelt, opened April 17, 1933 in Edinburg, Virginia.

This “volunteer army” was subject to military physicals, routine and discipline. Each man was paid $30 a month, of which $25 was sent home to his parents. Many of the camps were tent cities until the CCC took on a more permanent status and barracks were built. Most CCC camps were temporary and would move when a project was completed. Overall, there would be 4,500 camps throughout the CCC’s history with an average of 1,600 in operation each year. Camps were located in all 48 states and the territories.

The CCC men wore surplus military uniforms, ate C-rations, and rode military transport to work sites. However, there was no drilling, saluting, or weapons training. Many of the CCC men were underweight and the eight to twelve hour days of hard physical labor took its toll on them. A nickname for the CCC emerged, “Colossal College of Calluses.” Camp commanders quickly abandoned the C-rations and started buying provisions from local farmers to improve the diets of the CCC men.

In Fairfax County there were two CCC camps. Soon young men from the welfare rolls enrolled at the two CCC camps. The Fort Hunt CCC camp worked on the landscaping of the George Washington Memorial Parkway, a museum laboratory, and historic home restoration. This camp was considered a “model camp” and on June 8, 1939 King George VI of England and his wife visited the camp, making instant celebrities of any CCC man who spoke to or even shook the King’s hand.

The African American CCC men, who were segregated at Fort Belvoir with white officers in command, engaged in fire prevention, reforestation and erosion control.  They built a fire trail through dense woods in Springfield and fought a forest fire near Fort Belvoir helping to save several residents’ homes.

After hours, the CCC camps offered educational courses and vocational training. One goal for the CCC men was to eliminate illiteracy among them. On weekends, there were religious services and sports activities.

Many Virginia state parks and the Skyline Drive were CCC projects. The work of the CCC men created 11 new state parks in Virginia. The CCC’s accomplishments are immeasurable. The unofficial motto of the CCC “We Can Take It” was proved repeatedly by the efforts of two and half million CCC men, and their legacy continues today.
In the 1930's the Civilian Conservation Corps built a fire trail across part of Lake Accotink Park. 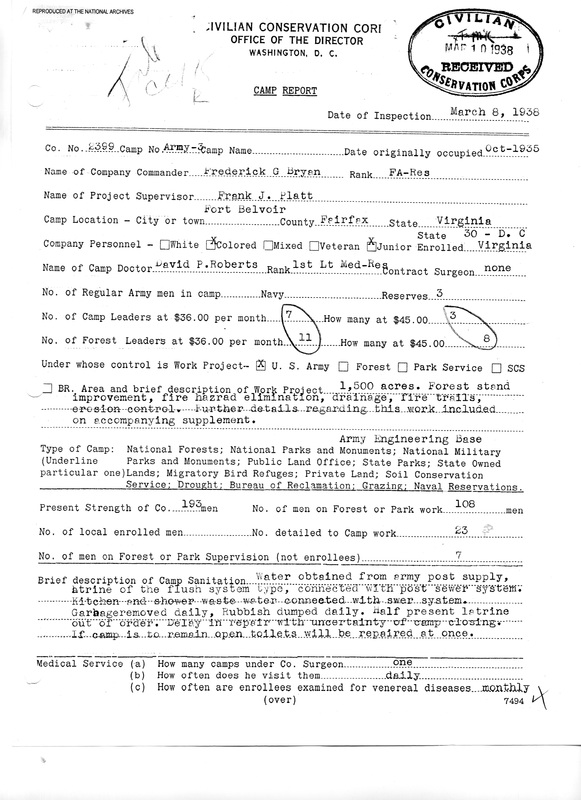 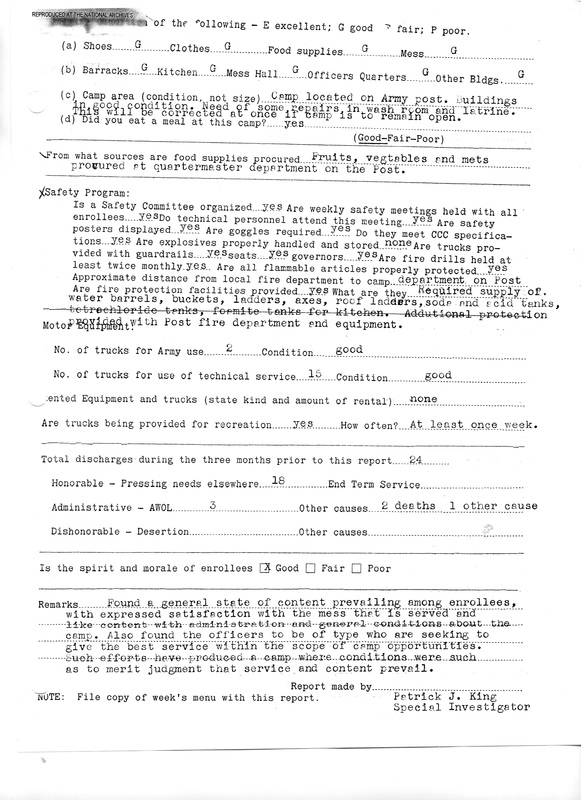 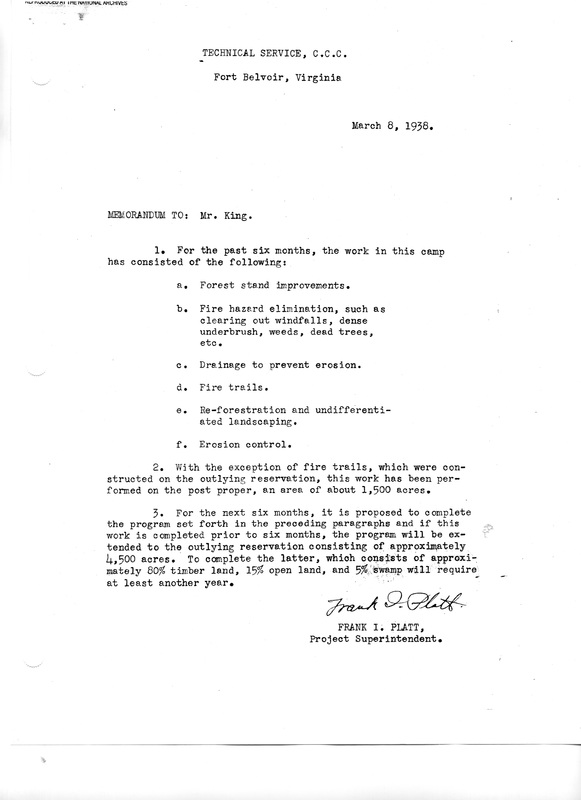 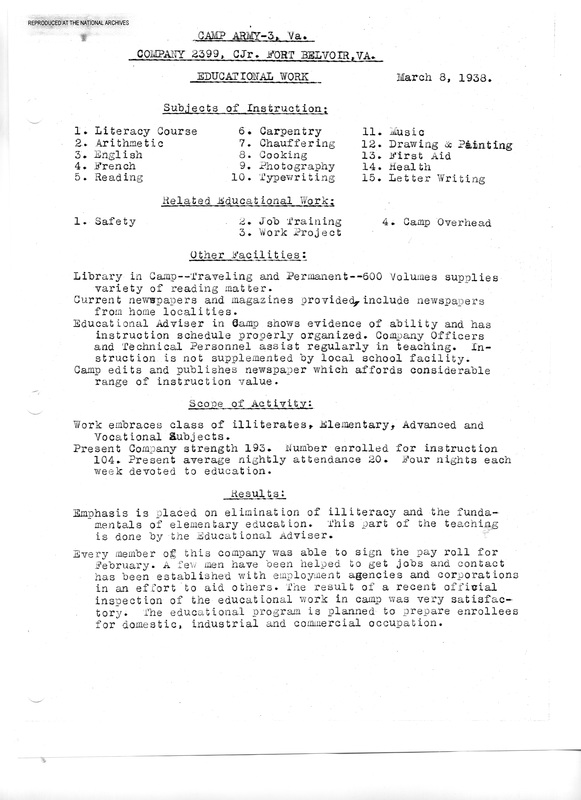 1949 Map of Ft. Belvoir and Accotink Lake Area Below 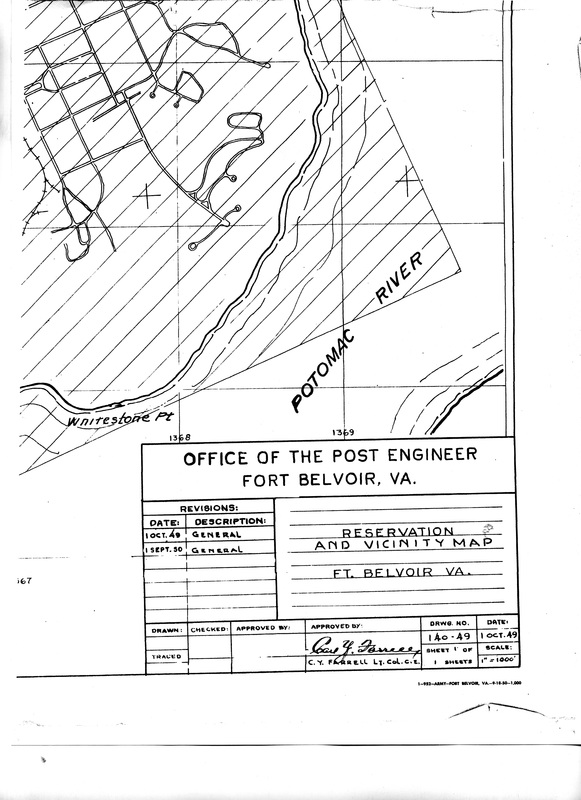 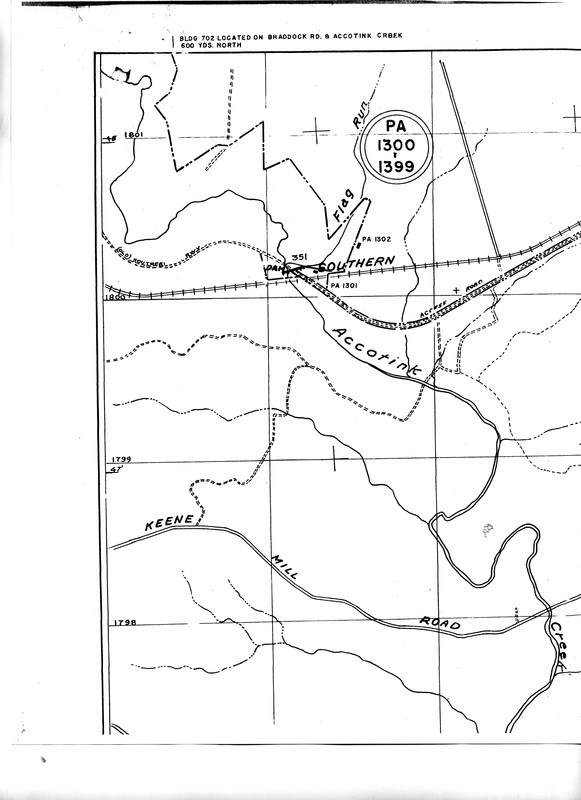 The CCC Road By Bill Sheads
A large tract of forest land was located in an area bounded by Braddock Road on the north, Springfield Road (now Backlick Road) on the east, Keene Mill Road on the south, and Rolling Road on the west. There were no vehicle roads in this heavily forested area. The Southern Railroad came through, near the center of this tract.

The major owners were Senator Joseph Bristow, the Lee family and the Gladfelter family. In all probability, Senator Bristow had noted that the Civilian Conservation Corps (CCC) was organized during 1933 as one of the first acts or proclamations by President Franklin D. Roosevelt. One of the jobs was constructing dirt roads through large forested areas. These roads provided access to the tract, which could be used by emergency vehicles in case of fire, and as short cuts from one side to the other.
Without documentation to substantiate as to why the CCC established an access road through this particular tract of land, I believe one could assume that the Senator, being one of the large tract owners, did make a request for a CCC road here.

The CCC road begins at Keene Mill Road approximately where the Keene Mill Elementary school building is now located. It meandered through the forest to the old O&R Railroad bed. My father, Cam Sheads, once mentioned that this section of the road was graded along the existing "Woods Road" (a horse and wagon trail), thus saving trees which by necessity would have to have been removed for the road right-of-way.

It followed the old railroad bed a short distance, and then turned north where it crossed over the Southern Railroad tracks. The crossing was filled with gravel and tar about ten feet in width. From this point the road was in a straight line to the intersection of Braddock and Ravensworth roads. The total distance was approximately two and one-half miles, and was graded dirt sixteen to twenty feet wide. During wet weather, it was nearly impossible for vehicle travel, since the dirt simply turned to mud.
There were two bridges on this road between Keene Mill Road and the railroad, one over Accotink Creek and the other over Rocky Branch. The Accotink bridge was approximately fifty to sixty feet long and ten feet wide, with high overhead wood supports. The Rocky Branch bridge was a smaller flat bridge about sixteen feet long. Some of the heavy timber beams and lumber for the bridges were purchased from the Sheads mill which was located in the area.

Notations:
1. All of the roads as mentioned earlier, surrounding this large tract of forestland, were constructed using "bank gravel". Bank gravel is unprocessed material which was dug from a gravel pit, and consisted of sand and small stones.
2. Keene Mill Road ended at Accotink Creek, and there was no bridge during the era of the CCC road project.

As a youngster, the CCC road became a big part of my life. I traveled it many times with my dad, while going to his several sawmill locations. Prior to construction of the CCC road, my dad used a ''woods road" coming in from Rolling Road approximately one quarter mile south of the Southern Railroad. Rolling Road passed over the railroad on a one lane steel-truss bridge. The new CCC road gave excellent accessibility to the central part of this large scope of forestland. It also provided access for recreation such as hunting, fishing, hiking, observing wildlife, and other activities.

When I became the ripe old age of thirteen, I got my driver's permit which one could do at that age with parental consent. Many times on Sunday, following Sunday school, my dad would let me take one of the logging trucks, and along with a couple of my cousins and friends from church, we would drive the CCC road and the old railroad bed to the area of what is now Lake Accotink. There we would fish or maybe scout around the old blown-out WWI Accotink Creek Dam. On occasion, we would go inside the undemolished section of this hollow concrete dam. This was a lot of fun for us young teenagers, since there was not much in the way of entertainment in those days. Usually there were baseball games at various locations in Burke, Fairfax, Annandale and Franconia, and on occasion we would stop by a game. Of course, we always had a big family dinner on Sunday, along with playing horseshoes, horseback riding, and other activities. All of this was finished before church at seven in the evening.

In Germany there is a section of roadway known as the "Romantic Road". My wife Dot and I have traveled that road admiring the wonderful scenery. I view the old CCC road for the same reason as the road in Germany, since we would drive the CCC road for enjoyment. The scenery, wildlife, and the forest all make the serenity of this once beautiful tract of forestland still linger in my mind today. I will never forget that old CCC road, just as one who has traveled the "Romantic Road" in Germany will never forget the experience.
Attachments 1. Copy of aerial photo showing the CCC road 2. Sketch showing the basic concept of the wooden bridge over Accotink Creek. 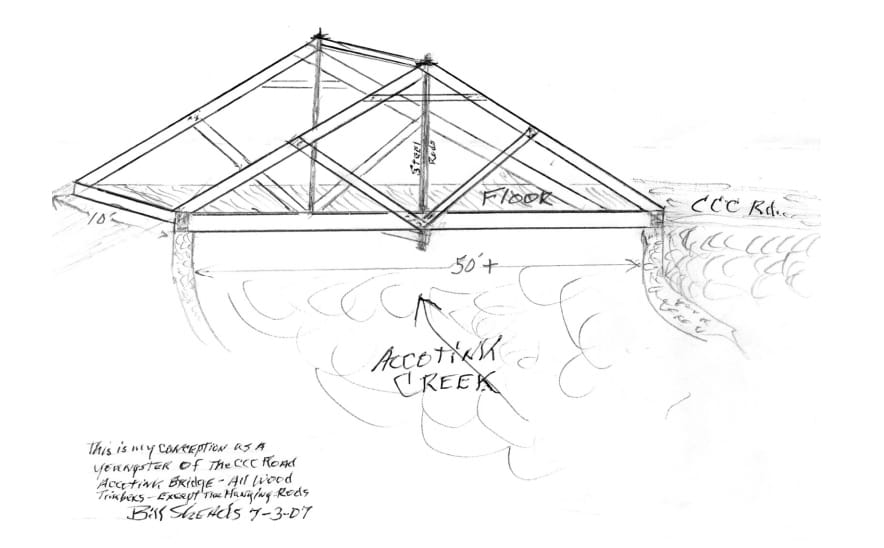