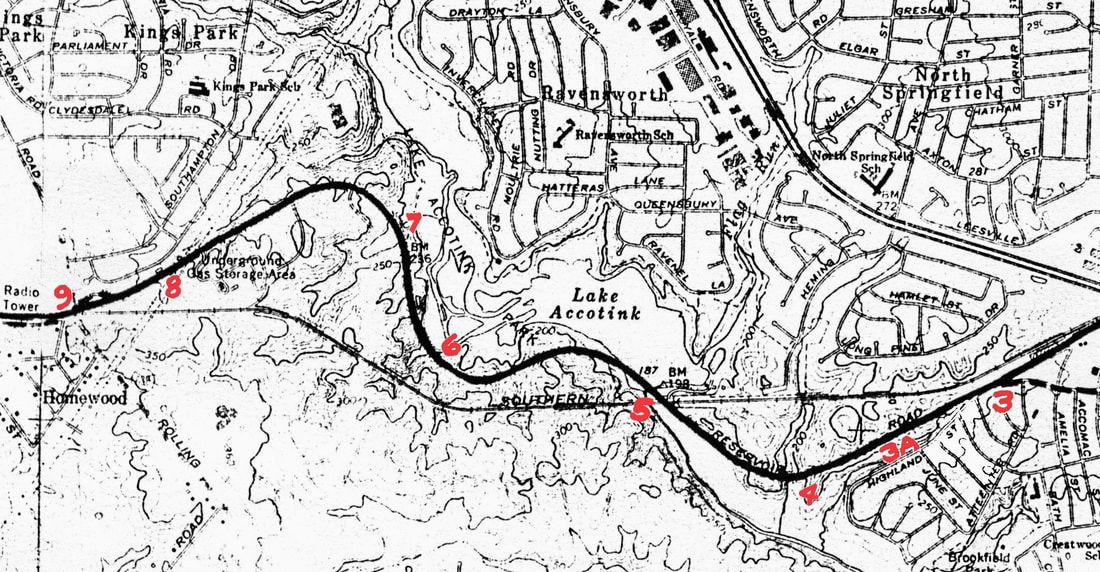 The Orange and Alexandria Historical Trail is dedicated to the pioneer railroads and their importance in the struggle between the Union and Confederate armies during the Civil War.  Clara Barton, the founder of the American Red Cross, traveled this railroad in her quest to provide service to others.  It is hoped that hiking this trail will provide all who follow an inspiration to emulate the sacrifice involved in serving their country and fellowman, and an appreciation for all who have gone before.

​The Orange and Alexandria Historical Trail, created in 1974 by Boy Scout Troop 881 of St. Mark’s Lutheran Church in Springfield, Virginia, stretched for 11.5 miles from Springfield Station at Backlick Road to Fairfax Station at Route 123.  The trail provided educational, hiking, and biking opportunities for Boy Scout and Girl Scout units.  A brochure described local landmarks and events related to the Orange and Alexandria Railroad and the Civil War.  Hikers and bikers who answered questions in the brochure qualified for the embroidered Orange and Alexandria Historical Trail patch.

In Lake Accotink Park the Orange and Alexandria Historical Trail follows the Civil War roadbed of the Orange and Alexandria Railroad – the longest existing stretch of the roadbed remaining.  For many years after its dedication markers along the trail and a display board at the marina described the trail.  Over time, however, increased traffic along the trail outside the park discouraged users.  Inside the park, vandals destroyed markers the display case was removed during renovations to the park.  The result: Significant historical information about our community was no longer available.

While new roads and increased traffic preclude safe use the entire Orange and Alexandria Trail, representatives from the Fairfax County Historical Society, Lake Accotink staff, and Troop 881 felt hikers and bikers using the portion of the trail within Lake Accotink should have access to the Civil War history of the trail they are traveling.  To that end this new brochure, extracts material from the original Orange and Alexandria Historical Trail brochure.  Numbers in the following section identify significant points on the trail whose location are shown on the accompanying map   This new brochure is available in the Lake Accotink Park administrative office or online at xxxxxxxxxxxxxxxx.xxx.

3. Orange and Alexandria Railroad.  Reservoir Road, the entrance to Lake Accotink was built on the roadbed of the Orange and Alexandria Railroad, which was completed in 1854, but was in operation at this point in 1851.  At the time this railroad was built, it extended from Alexandria to Orange, Virginia.  The O&A suffered severely during the Civil War and shortly after the war the road was renamed Virginia Midland.  Upon formation of the Southern Railway in 1894, the VM was double-tracked and became the northernmost segment of the Southern’s main line.  The present Southern Railroad tracks curve away about 100 yards to your right.  This stretch of track was sold near the turn of the century.

Control of the Orange and Alexandria railroad at Manassas was the military objective of both the Federal and
Confederate armies during the Civil War.  It was, therefore, the reason for the First  Battle of Manassas (Bull Run), and the O&A itself figured strongly in the Second Battle of Manasssas.  Straight across the highroad to Richmond from the north lay Manassas, where the O&A formed a junction with the Manassas Gap line which extended westward to Strausburg.  By seizure of this junction, the Federal army hoped to follow the O&A southwest to Gordonsville and thence proceed by Virginia Central eastward to Richmond.  General Robert E. Lee  of the Confederate Army understood the significance of the junction also, and dispatched troops to defend the junction against attack by the north.

3A.  Ditchley Station.  Proceed on Reservoir Road (O&A Trail).  Occasional railroad spikes and other hardware may still be found.  On your left, was a siding known as Ditchley which had a water tank and warehouse.  Remains of these structures have been found on the high bank only a few hundred feet from the culvert.
4.  Orange and Alexandria culvert.  Take a short hike down the path (left side) to see the original brick culvert of the O&A which is still in use.  This was built between 1850 and 1851.

6.  Site of attempted derailment.  On July 26, 1863, three days after the train shooting the incident, a loosened rail and some horseshoes on the track very nearly caused a train of supplies to plunge down a 12-foot embankment east of Burke’s station.  The engine and two cars jumped the break and a dozen Confederates waiting in the woods to burn the wreck were driven off by train guards.  It was stated that “The Guard saved the train, and Providence saved a smashup, which would have prevented the Army of the Potomac from receiving supplies.

Exasperated by these and other troublesome attacks on trains presumed to have been done by local residents who farmed by day and became guerillas at night, Meade issued the following warning:

If these measures should not stop such depredations, it will become the unpleasant duty of the undersigned, in the executions of his instructions, to direct the entire inhabitants of the district of the country along the tailroad to put across the lines, and their property taken for Government use.”

8.  Confederate attack.  On August 6, 1863, about one mile east of Burke Station on the Orange and Alexandria Railroad, 25 dismounted Confederate cavalry attacked 60 men of the Federal railroad forces cutting wood.  They and 25 4-horse teams were saved by the railroad guard.

9.  (Ravensworth) Rolling Road (No. 1).  The term “rolling” was derived from the fact that the great hogsheads of tobacco transported to the warehouses and shipping centers, were rolled over the roads.  A wooden pin was driven into each head of the cask, then rude shafts were attached to the two pins so that the hogshead looked somewhat like a present day garden roller.  It was moved by men, oxen, or horses.  This road was used by William Henry Fitzhugh to take tobacco to the landing at Pohick Run.