Historical Lake Accotink Park
The following pictures and notes were provided by Merlin "Mac" McLaughlin, who grew up where Hidden Pond Nature Center is today. 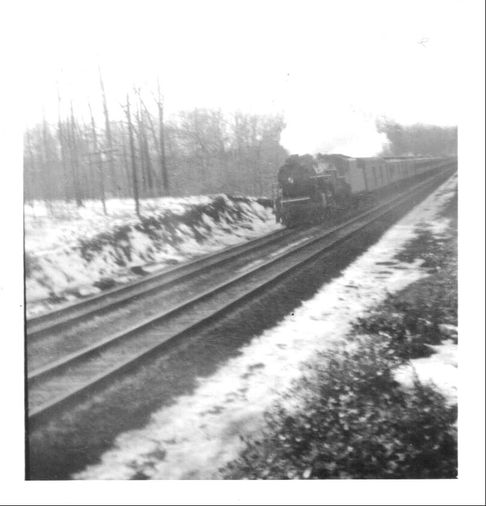 Attached are a couple of not-great-quality pictures that I may have sent you previously.  I took these on Dec 29, 1945, during a furlough while still in the Army.  I'm also attaching a couple other pictures of no great significance taken in that area earlier.

The picture of the dam is the then-new dam that was built on Accotink Creek just on the north side of the RR trestle.  There had been a dam in this approximate location built there during World War I to provide an emergency water supply for the DC area, but when that war was over the government dynamited a gap in that dam so as to not have to provide any further maintenance of the dam or lake.  And the original lake bed became a thickly-forested area.

The Southern RR then had passenger trains.  There was a passenger "Ravensworth" train stop located on the north side of the tracks maybe a quarter-mile west of the RR trestle.  The passenger shelter was a simple 3-sided shed-type structure, fully open on the side of the tracks, with a bench.  A woods-road departed from Rolling Road at its junction with Center Road and ran toward the Ravensworth train stop.  My dad worked for the government for a short period of time, and often used that train stop during the late 1930's.  That train stop disappeared due to non-use, probably about 1940 or so, but the said woods road was our primary access trail to get to that dam in the shadow of the RR trestle.

I (and a few other kids) used to occasionally visit the old previous dam and swim in the gap between the two sections of the dam, as there was a pool there with pretty good depth.  And we occasionally were observers of the construction activity during WWII as the remains of the old dam were demolished and the new dam was built, again to be an emergency water supply for the DC area.

The Corps of Engineers was in charge of monitoring and patrolling the lake after the new dam had been built.  I went into the Army in mid-1945, but before then several buddies and I occasionally made a couple-mile trek to go swimming in the new lake.  We had made an opening beneath the security fence that surrounded the lake to gain access.  Whenever we heard the sound of the patrol boat we got out of the water, crawled under the fence and waited in the woods until the boat left that area.  As I recall, we went swimming there that year  (1945) as early as March 31, on an unseasonably warm day (although the water was obviously still quite cold).

Eventually, as you know, the Federal Government turned the lake over to the Fairfax County Park Authority, whereupon it became known as Lake Accotink.